Let’s be honest, don’t we all like to wonder around in medieval cities, majestic castles and romantic mansions? As much as we learn from and are intrigued by these symbols of the past, we would not want to live in it without proper heating, running water and wireless internet connection. But although change today is a necessity to be ready for tomorrow, if it wipes out all connections with yesterday, it will create a lost generation. And unfortunately, Chengdu, like most of China, is blindly trusting Frank L. Wright’s words:

An architect’s most useful tools are an eraser at the drafting board, and a wrecking bar at the site. – Frank Lloyd Wright

The candy seller of the past era is lost in the rush of modern and ever changing Chengdu.

Old East Market Street as it was only a few years ago.

A traditional candy seller in the old East Market Street.

A local farmer trying to sell its handmade products in the old East Market Street.

The important thing is this: to be ready at any moment to sacrifice what you are for what you could become. – Charles Dickens

Now the old street only exists in memories; memories of people that have lost their roots.

A woman passes a pile of rubbish on a street listed to be ‘erased’. Next week; 2 years from now; who knows? But knowing that the coming end of their neighborhood is determined in higher realms far beyond their influence, the locals adopt a lifestyle of fatalism. Who cares? 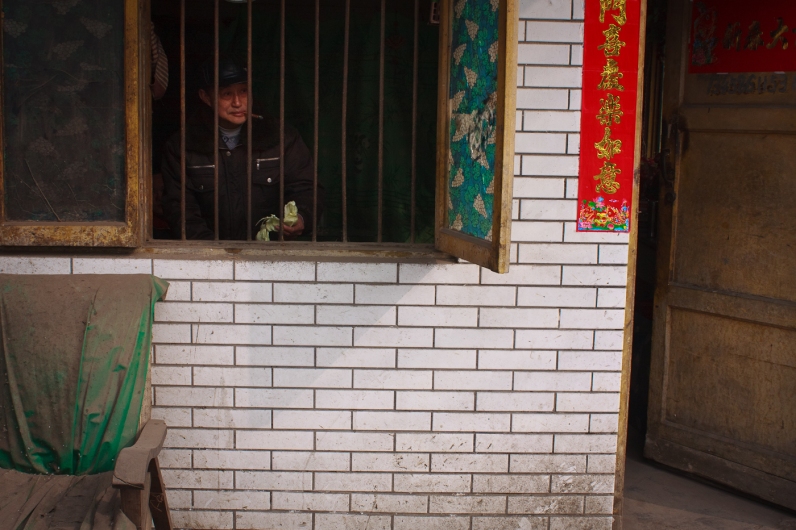 An old man looking from his home, listed to be demolished.

Bound as our lives are to the tyranny of time, it is through what we know of history that we are delivered from our bonds and escape – into time.  ~A.L. Rowse

An abandoned home in a street soon to be demolished.

An abandoned house soon to be demolished and replace by 30-storey-high apartment blocks.

A woman clearing trash after the demolishing of the old neighborhood.

And so, Chengdu’s skyline is changing and erasing all signs of its rich history.

La Defence… in Chengdu. Extravagant architectures like this, often copies of the worshiped free world, are not only an out-of -place sign of lack of creativity and vision, it shows a traumatic alienation of modern China from its own rich history.

People lining up to catch the fast train… symbol of China’s rapid development and change.

Youth waiting to go to their next destination. With the past existing only in their memory and no ancestral home to return to and no idea how their future China will look like, they are lost in fast changing Chengdu.

We are all revolutionaries now, addicts of change. – Christopher Lasch   But we need to remember: If you want to understand today, you have to search yesterday. – Pearl Buck

More photo impressions on this topic can be viewed on my photo site in the folder: Old Chengdu.