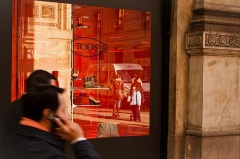 Sitting on a small balcony overlooking Firenze, the medieval city of Florence, with it’s Duomo and Palazzo Vecchio towering over red-tiled roofs with muffled city-noises echoing up from the sunless alleys below, a strange thought came to me: Chinese and Italians have a lot in common. Let me explain.

Marco Polo left the Italian peninsular from the true middle kingdom of modernity, the Venetian Republic, in the year 1271 on his well known adventurous trip of 24 years to fulfill his father and uncle’s earlier made promise to bring the ‘oil of the lamp in Jerusalem’ to Kublai Khan. But, as I recently discovered during a short visit to Italy, he brought more, much more. Or did he bring it all back?

But better not ask what he brought back: just like bird flu and swine flu and it seems all other animal-named flues, the Black Death came from, no, NOT from the Jews or gypsies we so easily blamed for it in the past, but from, yes, China. (From beautiful Yunnan, to be exact, can you imagine?!) With its first victims in, yes, Marco’s homeland and town, it soon decimated the population of Mediterranean Europe by about 80%. No wonder that nearly all of Marco’s 600 travel companions died on the way back. (As I said, better don’t say this aloud; it is politically probably not correct and proper and may well harm the so needed yet fragile Euro-China business relations. But you don’t really need to be a historian or 007 to see in this China’s early and long lasting success in biological warfare.)

But I’m getting out of topic. I was amazed to see how much the Chinese and Italians have in common. It started right away at the Florence airport while trying to get into town. I was surrounded by a chitchat that made no sense to me. It reminded me of my first arrival in China. Chengdu was still no more than an over-sized village and the airport’s customs checkpoint counter was of such quality that it fell apart when we arrived with equally qualified custom officers in over-sized uniforms who laughingly wanted to send our kids back just because they couldn’t read our passports. Arriving in this Chengdu, what struck me most was that, for the first time in all my travels, I encountered a language I couldn’t understand and there was no-one, really no-one, who could speak English. It made me feel lost and lonely and off guard. Arriving in Florence, it took a while before we found someone speaking English. Italian English that is; about as good as Chinese English.
But have you ever heard two Italians in conversation? They don’t talk. They sing. And while they sing, they completely forget to breath as if wanting to make sure they have said what they needed to say before departing to the afterlife by the end of the sentence. Like Sichuan women on the market, just not so loud.

Marco Polo may not have come from Florence, but I tell you: his 2 decade long shopping trip did not only bring silk to the reawakened Italians of the early Renaissance. Think of spaghetti, and bars in front of windows, enjoying life and traffic chaos. About this last point: the Milanese are really as good as the Chengdunese; their way of driving is driven by primitive impulses of survival and modern needs of pride, only a bit faster.

Then there is the squatty potty. Well known and much used around the world, my first encounter with a squatting toilet was not in China. It was, years ago, right in this Mediterranean heaven. We had just walked across the Pyrenees and set up our tent on a small camping. I was not too well and during the night had to run to the toilet to make sure nothing came out from below before I arrived. Once there I encountered a problem: the squatting toilet. Nowhere to sit! And how on earth was I to combine a squatting toilet with the free flow of diarrhea? Luckily, a handle was mounted on each sidewall and after some adjusting and balancing, I was hanging right above that hole in the ground. Just on time. But the old walls were no better than a Sichuan farmhouse wall and were of mud and brittle, very brittle… I don’t think I need to explain what happened next, but I’m sure you understand I wasn’t too thrilled to see these toilets again in China.

Italians seem to surpass Chinese when it comes to smoking. Women here smoke like walking chimneys. But somehow, they hold the cigarette with nonchalance. Italian women try to appear charming but are macho-ish in their smoking ways as much as Chinese men hope to be cool but appear feminine. Now of course, we can’t blame Marco for this -unless you’re called Berlusconi in which case everything is permitted.

Which brings me automatically to the next similar quality: corruption. Nothing in Italy seems to work without corruption and Berlusconi has refined this to an art. (That it doesn’t work with corruption is quite evident by Italy’s recent economical free fall, but let’s not go there.) Though I can’t recall rumors of Hu Jintao or his soon-successor Xi Jinping attending Silvio’s Bunga-Bunga parties, corruption is also in China a deeply rooted privilege. Just make sure no-one talks about it because that may cost you your head.

The city of Berlusconi, now that the country no longer is paying for his parties, the city still has his mark: Milan is the city for the rich-and-proud. All famous brands are lined up around their Piazza del Duomo with the somehow misfitting McDonalds squeezed right in the middle of it. Chinese tourists, finding heaven, are daily parading the mall as if walking on a catwalk with the latest designs dangling around their wrists and swinging around their hips and large shopping bags from Gucci, Yves St. Lauren, and Porsche on either side. These bags just can’t be big enough. Not so much for its content as for its visibility. It nourishes the ego and builds face and strengthens the guanxi [=connections]. For this reason, branded shopping bags can be bought on all Chinese online shops. Real ones go for around 20 Chinese yuan each, fakes for half. But neighbor and friends won’t know that, right?

Self conscious and smartly dressed, the Italian men live up to their charming macho image. And in pride, the Chinese men surely are Italians’ equals. Except for one thing: the handbag. Chinese men always carry a handbag. If it isn’t their wife’s, it is their own. I’ve never really understood this: it’s way too big for a wallet but too small for the latest iPad and you can’t fill it with green tea. Anyway, there is more: both enjoy Italian cars: Ferrari, Lamborghini, Maserati, Fiat. With only this small difference: the Italian man drives Fiat and needs to work hard in the Ferrari factory; the Chinese man drives Ferrari and plans to work hard on buying the Fiat factory. But who cares about these details?

Now here is a difference: hotels. Small local hotels. Here in Italy, they have history, character and personal care. In fact, our Italian hotel was quite like Fawlty Towers. Full of stuff of an age long gone and stairs that seem to go nowhere. For my convenience, the garçon parked the car and brought the luggage up but couldn’t find my water bottle. So I went down to get my water bottle but couldn’t find the car. I love these hotels where even the guests live off the fame of the past while ignoring yesterday’s dust on the mirror’s golden rim. No Basil here though. (I have a strong feeling he went to China after the last episode of this BBC comedy and made big bucks giving hospitality training, finding Chinese a captivated and quick-learning audience.) Without a Basil barking, it is all together pleasantly quiet and quite enjoyable, once you’re able to ignore the butlers that buzz around you like bees.

And that’s where the similarities start again. Chinese love this! Enter a restaurant in China and you’ll first have to work your way through an army of door-greeters singing “huang ying guang ling” [=be blessed and spend much] to really nobody in particular and then they hang around your table by the dozen watching you eat. The desire to be served doesn’t stop here. In-house butler services are now not only limited to England’s royal and loyal or America’s old-money families. Chinese nouveau-rich kick on it too; first Filipino illegals but now more and more ‘white’ Western Jeeves serving their every need.

There they are again. Two old ladies. While other early pensioners occupy the benches facing the bay, each day these ladies roam the small beach collecting small stones and small shells and breathing in the crispy fresh morning air. Each day. The whole winter season. It seems an useless act in this age where time is money, (preferably fast money, although many are now surprised by how fast it can disappear too), and you’re not supposed to waste it on a beach tracing your own footprints. But at the end of the day, or more correctly, at the end of the season, these two old ladies are ready to give ‘sea art’ classes throughout the summer to the boys and girls from the city whose mums and dads are stressed out and have no time to play. But here, people enjoy; hours by the beach; a good bottle of wine; no rush. Really, Italians know how to enjoy. And so do the Sichuan-ren [=Sichuan people]. But they hang out in teahouses by lack of an ocean nearby, drink tea by lack of wine and play mahjong until they lack money.

The question now is not: did Marco Polo introduced all this ‘good’ to China? Or are the soldiers of the missing Roman army divisions, who entered China centuries before Marco Polo, responsible for influencing China? We’ll never know. The real and more fundamental question now is: did Italy influence China or was it the other way around? But that’s history. And history, as Napoleon once said, is “but a fable agreed upon.” And thus, as the saying goes: “History is always written by the winners“, today it is China’s turn to write (and rest assured: re-write) history, and believe me, they’re good at it!

This entry was posted on February 11, 2012 by dutchinaman. It was filed under Travel Journal and was tagged with arrival in china, China, city of florence, Europe, florence airport, fun, Italy, kublai khan, mediterranean europe, Milan, palazzo vecchio, social, travel.